Time for day two of the April Travel Challenge and I decided that the time is right to share a post which I actually wanted to write a month ago!

On the 3rd of March 2017, I finally passed my driving test after a really drawn out process of not wanting to drive. My butt was finally kicked into gear when I found a job that I liked with an ultimatum – if you want this job then you’re going to have to be able to drive. 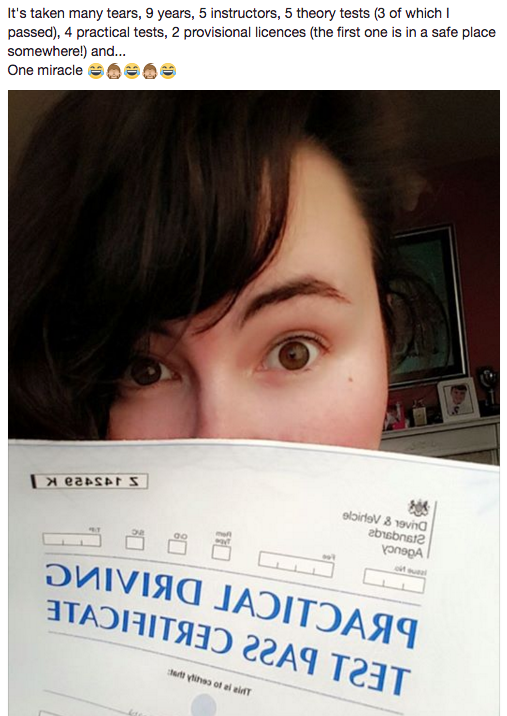 Here’s the thing, I really never had any interest in driving (hence why the learning was drawn out to various spells over 9 years). I was never one of these people who longed for that freedom. People said that would all change once I had passed my test and got used to being behind the wheel, but here’s the first confession – it hasn’t. I’m still always down for taking the bus when the perfect excuse arises. I will always let somebody else drive without arguing.

So I’m sure many people are wondering exactly why this is the case? Why wouldn’t I relish the freedom that being able to drive my own car has? Well I’ll tell you…

other drivers are freaking scary, dude.

That’s right, I’m scared of other drivers. When you think about it (because I’m sure many of you have never thought about it) it’s not even that stupid – it doesn’t matter how sensible a driver you are, if an irresponsible driver is on the same road as you at the same time you’re going to have to deal with them. Unfortunately there is absolutely nothing you can do to control other drivers. You can’t stop them from speeding, or from overtaking when they shouldn’t or from driving when they’re on their phone. We all know people who do these things, and we’re all helpless in making them realise what idiots they are – if they get off with it once they will often continue until something happens, by which time it’s too late.

Thankfully there are more sensible drivers out there than not, which means that every journey isn’t a complete Hell. There is no shortage of silly drivers though – those who go above the speed limit just to overtake you (then continue blatantly speeding), those who come round the corner on the wrong side, those who can’t leave a safe distance between cars, those who will overtake you whether they can see if there is something coming down the other side of the road or not, those who swerve all over the place because one of their hands is pre-occupied holding their phone to their ear…the list is almost endless.

I’m not saying I’m a saint – I’ve accidentally tipped over the speed limit more than once, misjudged the bendiness of a corner and ended up going over the line, nipped out onto a round about when I probably should have waited and made very last minute decisions to the inevitable frustration of drivers behind me (and my Mum, if she is in the passenger seat.)

So what do I do to keep the driving anxiety at bay? I try my best to make sure I have some good tunes that I can sing along to as I drive (not that my passengers always agree they are good tunes, but they are unimportant). I have a supply of Haribo in the glove compartment (that’s what it was designed for, right?) because if I do a good drive I deserve a reward, and if it’s a stressful drive then I deserve a stress sweet. I take a few seconds/minutes after getting in the car before setting off to mentally prep (this doesn’t mean that I still sometimes set off at night without switching my lights on *facepalm*). Perhaps most importantly, I have learned to stand my ground (metaphorically) and make evil eyes at the cars trying to run into my boot (through the mirror, so they definitely can’t see me) – do what makes you happy needs to apply to your driving too and you shouldn’t feel pressured into going faster than you’re comfortable with on a wet road just because you have a speed freak behind you. The best advice (or at least, in the top 10)that I have ever got for driving is “if they want to pass you they will”, and this is the truest thing – if you’re not going fast enough for other road users they won’t hesitate to go past you (regardless of whether it’s really safe to or not!)

What are your top tips for safer driving? Are you a nervous driver too? Who else has a secret stash of sweets in their car?  Let me know in the comments below!

Two posts from other challenge bloggers that I think are worth checking out today:

Yoga Capital Of The World

7 thoughts on “Confessions Of A Nervous Driver | April Travel Challenge”