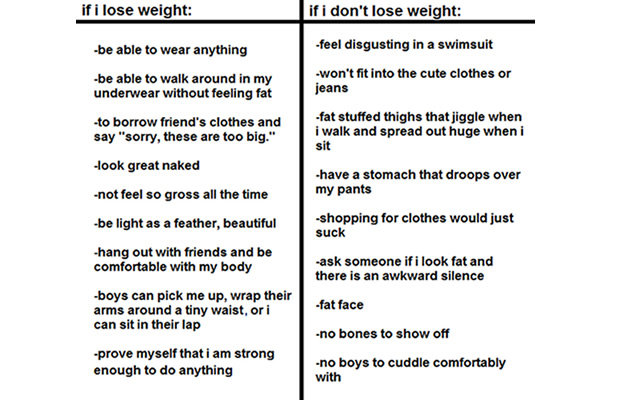 The most popular new years resolution is about losing weight and getting fit. How will you do it?  Will you diet? Will you exercise? Maybe you’ll do both.  Maybe you’ll starve yourself.

“Never!” I hear you say, but you would if Ana told you to.

Ana is manipulative, vicious and will get inside your head.    With the help of Mia, her partner in crime, they murder 20% of their victims.  Almost 15% of Americans who have an eating disorder are male , so yes it is a female dominated illness but that is still a large proportion who are not female.  Celebrity sufferers include Elton John, Paula Abdul, Jane Fonda, Princess Diana and Joan Rivers.

One of Ana and Mia’s biggest tools is ‘thinspo’.  In my opinion there are two types of thinspo- there is good thinspo and there is bad thinspo.

Good thinspiration is your bog standard weight watchers advert where somebody has lost some amount of weight over a disclosed length of time, like when people upload photos of “Here’s me a year ago 30lbs heavier.”  This is motivational, but you’re not exactly going to get hooked on it. 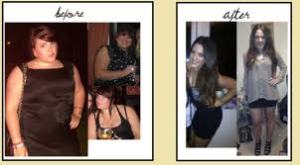 Of course this isn’t what Ana wants, but  often this is how she first gets inside your head.  Ana loves bad thinspiration, and she’ll spoonfeed it to you.  She wants you to want it. “Look at this, this is perfection.” she says.  Thigh gaps, hip bones and ribs are generally the focus of such posts.

Thinspo isn’t just photographs, it’s words too.  I hereby give you ‘The Ten Commandments Of Ana.”

1. If you aren’t thin you aren’t attractive.
2. Being thin is more important than being healthy.
3. You must buy clothes, cut your hair, take laxatives, starve yourself, do anything to make yourself look thinner.
4. Thou shall not eat without feeling guilty.
5. Thou shall not eat fattening food without punishing oneself afterwards.
6. Thou shall count calories and restrict intake accordingly.
7. What the scale says is the most important thing.
8. Losing weight is good/gaining weight is bad.
9. You can never EVER be too thin.
10. Being thin and not eating are signs of true will power and success.

On top of these commandments there’s also the ‘Rules Of Thin’. Things like:

-“Ana only loves you if you’re thin. Never give up.”

-“The mirror doesn’t lie, you really are fat.”

-“Recovery is a sin, but sins can be forgiven.  Obesity is a crime however, and crimes stay on your record FOREVER.”

…and these are only a handful of them.

Now it doesn’t really matter how you feel about this, the fact is that a very large number of people across the world are living their life by these rules, because the little voice has got into their heads.  The voice doesn’t sleep, it doesn’t go away and it doesn’t take a day off. Eating disorders are not attention seeking, they aren’t just extreme dieting.  They are a very serious illness.  I don’t have an eating disorder, I never have (I’m sitting here right now with a bag of Cadbury Biscbits and my staple diet is cheese and crisps, I’m probably as far from EDs as is physically possible. Om nom nom junk food.)  I follow a lot of thinspo blogs, tumblrs and twitter accounts though, and I regularly see tweets like “Please stop asking me how to become anorexic, it’s an illness not a choice.”  So many people don’t realise this though.  It’s like an addiction, and just like with every other addiction the people who don’t understand are going to tell you to just get over yourself and snap out of it.

I can see how easy it is to get pulled in by all of this though.  Maybe I’m just gullible, maybe it’s because I’m all too familiar with the never ending battle for perfection.  I’m not skinny, I’ve never been anything like it.  I don’t reckon I’m ever going to be skinny,  that would be a terribly wicked twist of fate.  I’m okay with it.

There’s also the third type of thinspo, one which is neither good nor bad.  Fitspo, as it is known, is encouragment to excercise and get healthy that way, which I believe is good as long as you don’t become a fitspo addict.  As long as it’s used as motivation, and not a set of rules by which to rule your life, I think everybody needs a bit of fitspo in their life. 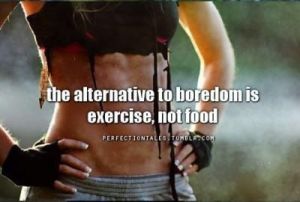 So if you resolved to lose weight, or get fit this year, I wish you all the best.  Be careful, and don’t get too carried away.  Learn instead to love the skin you’re in, because clearly your friends, your family, and your romantic counterparts if you’re that way inclined, already like it.  What’s inside is much more important anyway.