At what point in time did it become the societal norm to assume that a person was heterosexual until given reason to think otherwise?  Why is it not generally assumed that everybody is bisexual, pansexual or dare I even be selfish enough to propose asexual?

Growing up I always just assumed that I was something of a late developer emotionally, despite everything else having kicked into gear quite early on.  Other people just assume that you’re so shy that you keep your secrets secret, not realising that it is in fact physically possible to be 14 or 15 years old and not have a ‘crush’.  Others assume you’re a closet lesbian.  I spent years waiting for things to change-one way or the other- but they never did.

I read an article in a magazine when I was 17 and suddenly things began to fit into place.  You start to dig deeper and there are things which really do start to make sense.  Asexuality is not, as many people seem to think, just a lack of (or incredibly low) sex drive.  It purely means that, for me anyway, the ability to feel physical or sexual attraction is non-existant.  It is reckoned that around 1% of the world’s population are asexual.  It is not a physiological issue, nor is it a disease.  Perhaps it’s partially psychological but I don’t think so.  Asexuality is different from celibacy. Being a celibate is a choice that person makes, asexuality is not.  Asexuals can be gay, lesbian, straight or any other sexual deviation.

I’m not ashamed of my sexuality.  As much as I don’t introduce myself as “Hey I’m Kirsty … I’m asexual.”, I am perfectly open about it. 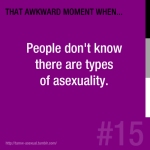 As much as people are much more aware of asexuality nowadays, the amount of ignorance and misinterpretations surrounding it are still somewhat infuriating.  I recently read on Twitter recently that “all asexuals are just closet homosexuals.”  Sure, maybe some people do abuse asexuality as a cover-up but that is not the case for all of us. The word “frigid” comes up a lot too, not all asexuals are virgins. There are some who actually participate in a fully functional sexual relationship regardless.  Anybody who knows me knows that I’m a major hugaholic.

No, I don’t say it just to avoid awkward questions, if anything it just draws more.  No, I don’t just say it to avoid people. No, I’m not attention seeking.  I can’t help the way I am, I didn’t exactly choose to feel this way.  There is nothing more irritating than the guy who thinks he can change you, and then sets out on a mission to prove you wrong.  Leave me be, dammit, and if you’re not happy then move the Hell on.

As much as I’m not heterosexual, I don’t associate myself as a part of the LGBT community.  My understanding of LGBT (Lesbian, Gay, Bi and Trans) is that it acts as a network for sexual minorities, and since asexuality is a lack of sexual desire I personally don’t really feel like it belongs there.  Don’t get me wrong, I think that the support LGBT networks provide for asexuals is fantastic, and if I ever find myself veering more towards a demi-sexual orientation I would be perfectly content to identify, I just don’t feel that it’s the right place for my sexual identity right now.

www.asexuality.org is a rather wonderful place to visit. 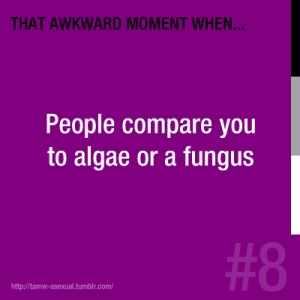 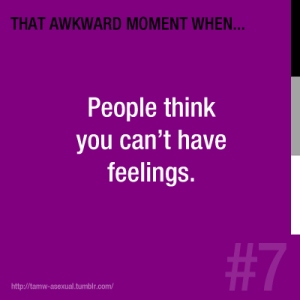 4 thoughts on “Asexy And I Know It”